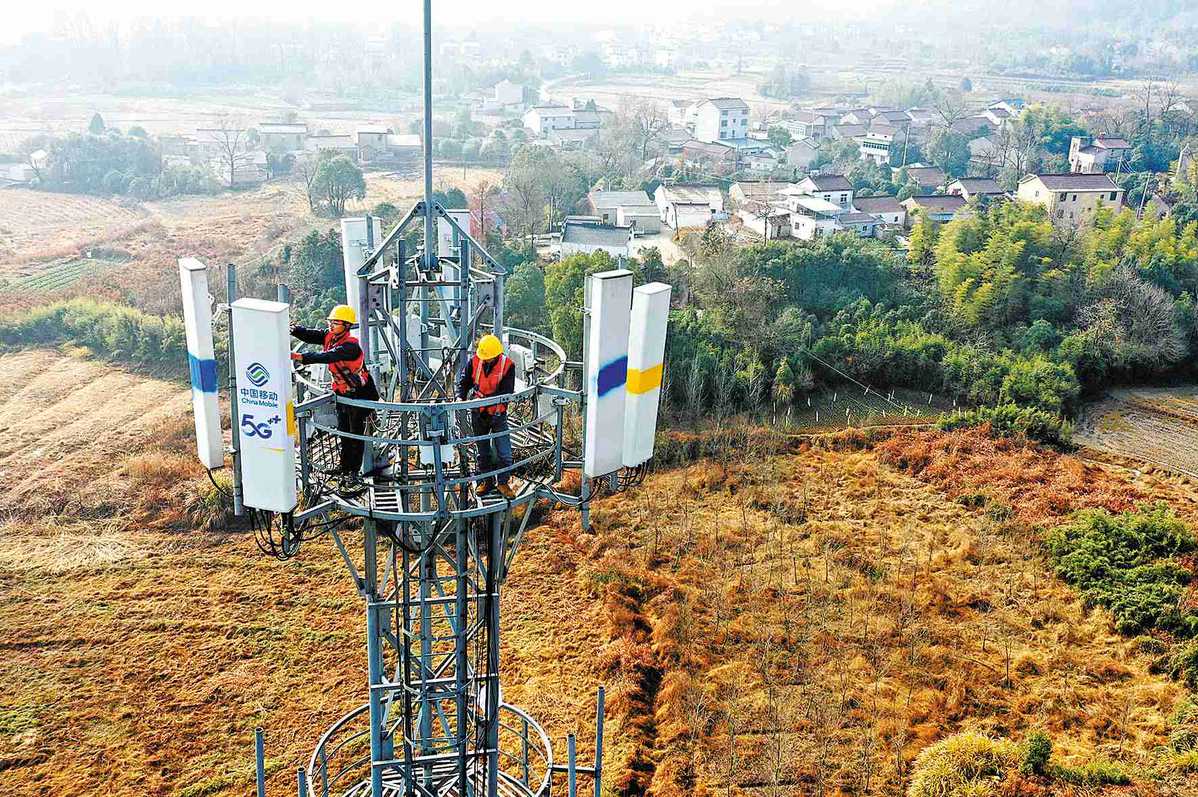 Local governments in China are doubling down on plans to accelerate 5G rollout this year. This is in sharp contrast to the situation in the United States where the federal government is likely to face a shortfall in funding for its plan to replace Chinese equipment in telecom networks, posing connectivity challenges to people in rural areas in the US, experts said.

More than 20 provincial and municipal governments in China have emphasized efforts to accelerate construction of "new infrastructure" like 5G and data centers in their work plans for this year.

Shanghai, for instance, said it plans to build more than 25,000 5G base stations this year to push forward the in-depth coverage of the superfast wireless network. The city also has ambitions to build super large computing power platforms to meet growing demand.

Zhao Zhiguo, spokesman for the Ministry of Industry and Information Technology, China's top industry regulator, said earlier:"2022 is a critical year for the large-scale development of 5G applications. We will continue to improve 5G network coverage and accelerate the in-depth integration of 5G and vertical industries."

One of the priorities is to moderately speed up the coverage of 5G in counties and rural towns, Zhao said.

Ten ministries, including the Cyberspace Administration of China, recently unveiled a digital rural development action plan for the period from 2022 to 2025, which called for an intensified push to promote digital infrastructure upgrades in rural areas.

Telecom operators are also moving fast. China Mobile, the nation's largest telecom carrier, for instance, said it aims to achieve continuous 5G coverage in rural towns across the country by the end of this year.

Telecom carriers' 5G plans seek to harness the power of more than 1.4 million 5G base stations that stood in China by the end of last year. 5G signals are already available in urban areas of all prefecture-level cities, more than 98 percent of county-level towns and 80 percent of rural towns, MIIT data showed.

But, in the US, the scene is a contrast. The US Federal Communications Commission found a shortfall in funding for its plan to replace Chinese telecom equipment. Inadequate finance is likely to pose connectivity challenges to people in remote areas in the US, experts said.

According to a report on MobileWorld Live, a telecom industry website, the FCC said local telecom operators' requests for funding to replace network equipment made by Chinese companies Huawei and ZTE totaled $5.6 billion, almost three times the $1.9 billion allocated by the US federal government.

The FCC banned US telecom carriers from buying Huawei and ZTE's equipment via federal subsidies, citing what it alleged were national security concerns. The two Chinese companies have repeatedly denied the accusations, which they said are groundless.

Xiang Ligang, director-general of the Information Consumption Alliance, a telecom industry association in China, said Huawei and ZTE's products are currently used by US telecom carriers to offer network and broadband services in some of the most remote regions in the US.

The US government is wasting big money on replacing Chinese telecom equipment, and consumers in rural areas in the US will suffer from the lack of quality telecom services, Xiang said.

Steve Berry, president and CEO of the Competitive Carriers Association, a trade group for about 100 wireless providers in the US, issued a statement calling on the US government to ensure the FCC program is fully funded so that connectivity is maintained during the operators' transition to new equipment for their networks.