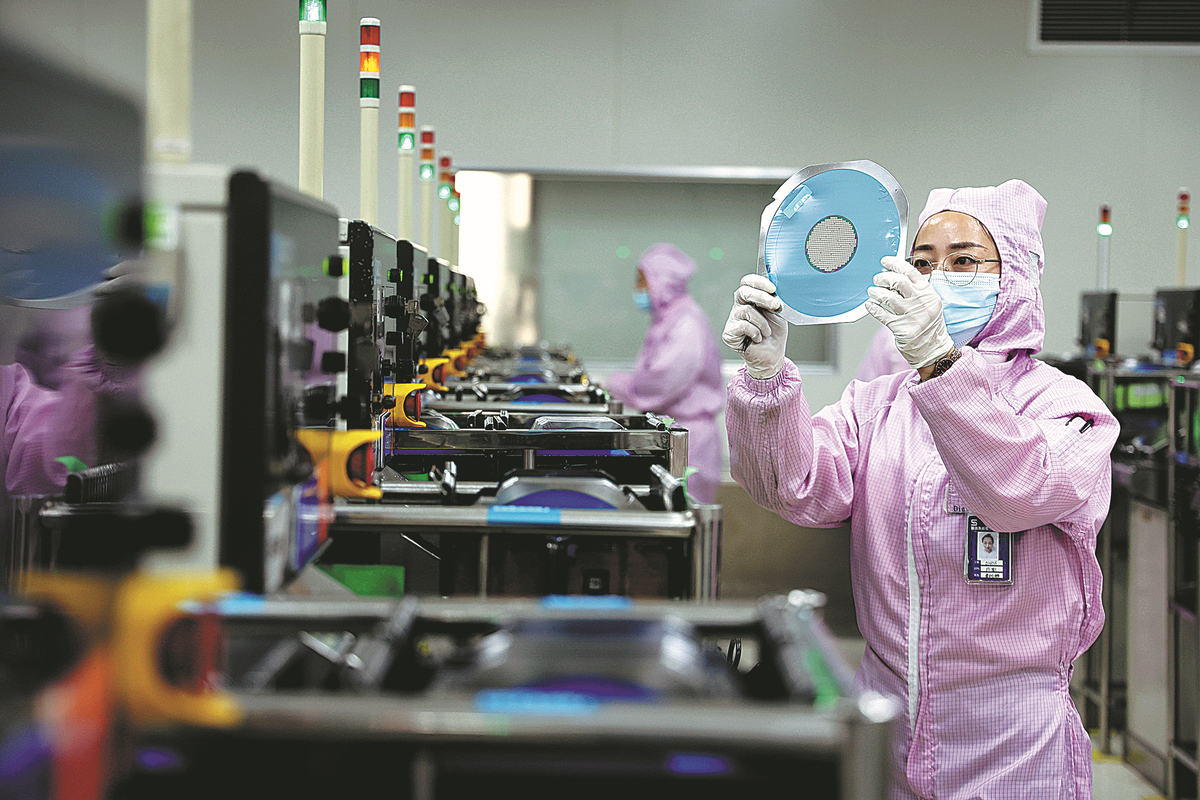 China's integrated circuit industry is expected to witness rapid growth in the next few years, industry experts said, while calling for increasing research and development input and strengthening independent innovation as part of the broader push to establish a relatively complete semiconductor industry chain system.

They added US politicians' trick of playing up the "China threat" theory in the semiconductor industry is groundless and doomed to fail. They said the technological blockade will hurt the interests of US companies, impede global cooperation and jeopardize the global supply chain.

Data from the China Semiconductor Industry Association showed the revenue of China's integrated circuit industry reached 685.86 billion yuan ($108.4 billion) during the January-September 2021 period, up 16.1 percent on a yearly basis.

The semiconductor industry in China maintained steady growth in 2020, with total sales rising 17 percent year-on-year to 884.8 billion yuan in 2020, it said.

The nation has scaled up the production capacities in the IC industry. Data from the National Bureau of Statistics showed China produced 359.4 billion units of ICs last year, up 33.3 percent year-on-year, doubling the growth rate in 2020.

"There is a surging demand for semiconductors, which are used in a wide range of fields, from smartphones, computers, tablets, sensors, and to cars as well as home appliances," said Li Xianjun, an associate researcher from the Institute of Industrial Economics at the Chinese Academy of Social Sciences.

China's semiconductor industry has seen robust growth since 2018, but lags some developed countries in terms of chip materials and manufacturing equipment due to lack of core technologies, Li said, while underscoring the significance of sticking to independent innovation.

Western media recently reported that China pursues "self-reliance" in some technologies such as chips. Meanwhile, the United States and the European Union have adopted incentives to boost the production of semiconductor chips.

Xiang Ligang, director-general of the Information Consumption Alliance, a telecom industry association, said US attempts to crack down on China's semiconductor industry and preserve its hegemony is not only doomed to fail but could also backfire.

US political leaders are hyping the "China threat" theory in chips, but the US is still taking the lead in the world's semiconductor industry. "It is ridiculous and vicious that the US imposed sanctions and restrictions on Chinese tech companies, while it stepped up support to spur its indigenous chip making industry," Xiang said.

He said the technological blockade will not hold back the development of China's semiconductor industry, but make them improve research capacities and strive for more breakthroughs in the field. The US sanctions on Chinese tech firms will not only hurt the interests of many US chip companies, but also disrupt global industrial and supply chains, he added.

Roger Sheng, vice-president of research at Gartner, said although China has made tremendous progress in developing its semiconductor industry in recent years, there is still a huge technical gap between Chinese chipmakers and their foreign peers.

Sheng said lithography machines that play a crucial role in the production of chips, raw materials, and IC packaging and testing devices are highly dependent on imports. "It will take five to 10 years for Chinese chipmakers to fully achieve self-reliance in the cutting-edge semiconductor segment."

Sheng called for domestic companies in the upstream and downstream areas of the chip industrial chain to strengthen cooperation, master core technologies and develop homegrown chips.

The US government has put dozens of China's major tech companies, including Huawei Technologies Co and Semiconductor Manufacturing International Corp, on an entity list which restricts their access to US technologies such as crucial software and semiconductor production equipment.

He said the reason why US chip firms can keep their leading positions is because they invest heavily in R&D. About 27 percent of their revenues goes into research on average, twice as much as that of other countries. The high investment empowers companies with advanced technologies, which in turn supports them in making competitive products, he explained.