Xiong'an leads in blockchain tech use

The Xiong'an New Area in North China's Hebei province has become the first city to use blockchain technology for development after it launched a city-level blockchain core system for the complete development of a digital city on Monday. 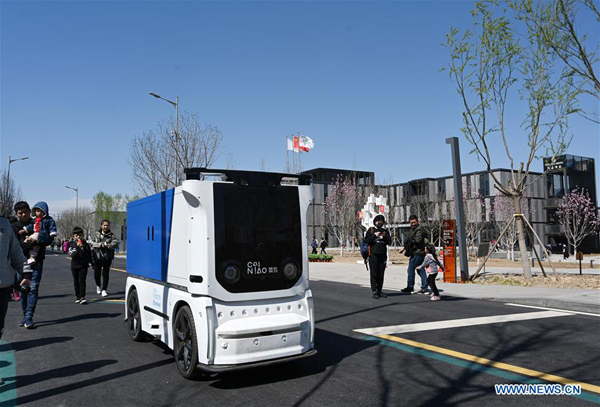 "It is the first system in the world to function as a city's new-type infrastructure. It can be applied to the entire area's development and duplicated by other cities in the future," Meng Hongwei, deputy head of the Xiong'an Blockchain Lab, said during a blockchain forum.

The laboratory was established in March to research and apply blockchain technology for the area's construction and development.

Blockchain, an open and distributed digital database for any transaction involving money, goods, property and more, provides a high level of security by creating a record whose authenticity can be verified by the whole community.

Since its establishment in 2017, Xiong'an has kept exploring the application and development of blockchain technology in different areas, Chen Gang, director of the area's administrative committee, said in his written speech to the forum.

"For resettlement compensation, about 20 billion yuan ($3 billion) has been paid via a blockchain payment system in Xiong'an New Area," Chen said, adding the efficiency was increased by more than 80 percent.

Besides, blockchain systems are also used for paying salaries to migrant workers and as money for purchasing construction material, Chen said.

Located about 100 kilometers southwest of Beijing, Xiong'an New Area was set up with a primary task of conducting noncapital functions of Beijing, including universities, research institutes and enterprise headquarters.

At present, large scale construction is going on in the area and some local residents will be resettled in newly-built residential communities.

"The blockchain has benefited 138 villages and more than 20,000 households, who don't have to worry about their compensation or resettlement anymore thanks to the features of blockchain－forgery-free, open and transparent," said Zeng Yufeng, business director of ICBC Information and Technology Co Ltd, which has teamed up with the area's government to use blockchain for compensation payments. Based in Xiong'an and founded in May 2019, the company is a wholly owned subsidiary of Industrial and Commercial Bank of China.

The compensation was directly paid to residents via a blockchain-based payment system, which helped reduce the possible intermediate links and avoided diversion or misappropriation of funds, said Wu Haijun, deputy director of the area's administrative committee. Over 160 construction projects and more than 40,000 migrant workers were paid via blockchain-based payment systems, said Wu.

"Based on the system, the city can apply blockchains in various usage scenarios, such as public services, digital trade, city management and digital finance," said Meng. The core system is different from existing blockchains like consortium blockchain which is developed and used for certain specific enterprise businesses, he said.