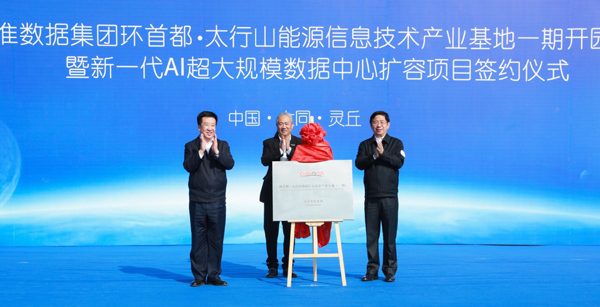 The center, built by Chindata Group, supports artificial intelligence-based computing power basic services. It is based in Chindata's energy data industrial base in Datong, namely Taihang Mountain Energy and Information Technology Industrial Campus of the Pan-Beijing Area, and has an IT volume of 50 megawatts - Asia's highest level for a single data center.

Zhang Jifu, secretary of the Datong municipal Committee of the Communist Party of China, said: "The opening of the data center is of great importance to boosting Datong's energy information technology development. Chindata's energy data industrial base, where the data center is based, is a strategic project in Datong. Currently, the industrial base is taking shape. It is injecting strong impetus to the city's development of new infrastructure, new technology, new material and new equipment."

"The company should seize opportunities to make full use of the integration of data center and renewable energy, to turn Datong's advantage in energy to the advantage in strategic newly emerged industries," he added.

On the same day, Chindata and the Datong government signed an investment agreement of another data center in Chindata's energy data industrial base. With a total investment of 15 billion yuan ($2.2 billion), the next-generation hyperscale data center, which covers 500 mu (33.3 hectares), will be further expanded, to support the tremendous computing power demand in AI, automatic drive and quantum communication.

Chindata's energy data industrial base in Datong was established in 2018. According to the company, the planning area of the industrial base is 2,500 mu, and there are a total of seven phases of the construction project. The first and second phases of the project were put into operation in 2019. The third and fourth phases will come into service by the end of this year.

The company said when the seven phases are all put into operation, the industrial base in Datong, together with the company's hyperscale data zones in Beijing and Hebei, will form an integrated data aggregation. The aggregation will effectively meet the digital demands from Beijing and Tianjin as well as the Xiong'an New Area in Hebei province.