Huawei Technologies Co highlighted its commitment to the European market, which includes plans to open 50 new offline local stores, despite restrictions by the United States and all the challenges it faces in one of its most important battlefields. 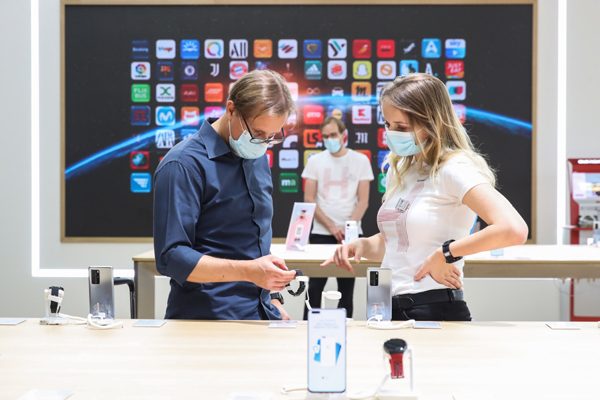 Walter Ji, president of Huawei's consumer business group in Europe, said the region will be an important market for Huawei in the next decade and the Chinese tech heavyweight will open eight flagship stores in Europe by the end of this year. The stores will be located across Spain, France, Belgium, Italy, Germany, and the United Kingdom.

There are also 42 local experience stores in the pipeline, which will enable European consumers to have wider access to Huawei's smartphones, smartwatches, and other internet-of-things products, Ji said in a keynote speech to the IFA 2020 Special Edition consumer tech fair in Berlin, Germany, on Thursday.

It is notable that Huawei did not release a new generation of Kirin chips or other products at the IFA as usual, which raised questions about how Huawei will move forward to deal with the US government's latest tightening of its semiconductor ban, analysts said.

To cope with these restrictions, Huawei developed its in-house operating system Harmony, and has come up with the Huawei AppGallery. The company has been working hard to build the ecosystem for Huawei Mobile Services, better known as HMS, which is the foundation for its ability to sell smart devices in overseas markets.

Ji said the company has made strides in promoting the in-house platforms.

"In the first half of this year, the Huawei AppGallery had 33 million monthly active users in Europe. Also, it has seen 184 billion downloads worldwide, making it the third-largest app store in the world, just behind Google Play app store and Apple's iOS app store," Ji said.

To offer better localized content to European consumers who have relied heavily on Google Search, Huawei launched a new search service named Petal Search by partnering with third-party search content providers like Qwant, the largest search engine in Europe, and Yandex, the No 1 search engine in Russia.

From April to June, Huawei dropped from the No 3 smartphone vendor in Europe to the No 4 spot, having been overtaken by Xiaomi. Huawei witnessed a 17-percent year-on-year decline in smartphone shipments to Europe, said market research company Canalys.

That came despite its robust performance in the China market, which enabled Huawei to surpass Samsung as the world's largest smartphone vendor for the first time in the second quarter.

But given that Europe is seen by Ren Zhengfei, the founder of Huawei, as the second home of the company, analysts said Huawei will step up the push to expand further in the market.

Huawei currently has more than 14,000 employees in Europe and it helped create 223,000 jobs in the region last year.

Since 2010, Huawei has invested more than $1 billion in innovative research projects in Europe. The company has also cooperated with over 100 research institutions and universities in the fields of computing, Huawei said.