China will step up its push to expand its 5G network coverage, build a dynamic industrial ecosystem and strengthen international cooperation, so as to quicken the commercialization of the superfast wireless technology, officials and experts said. 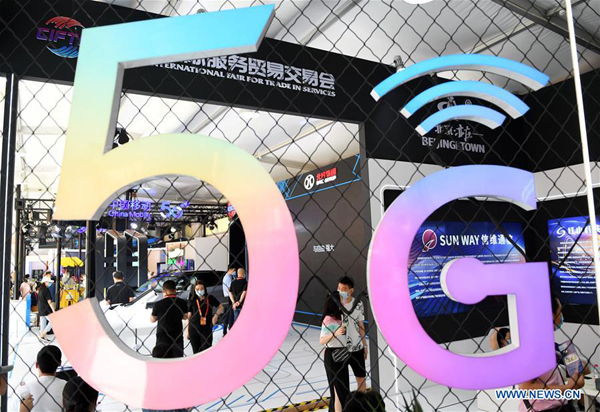 Wen Ku, spokesman for the Ministry of Industry and Information Technology, said on Saturday that China has built over 480,000 5G base stations so far, and more than 100 million devices have been connected to the 5G network, as part of the nation's broader push to accelerate 5G deployment.

"Chinese companies are applying 5G technologies to sectors such as manufacturing, healthcare, media, and transportation, despite the fallout of the COVID-19 outbreak," Wen said.

According to Wen, Chinese companies have pioneered a wide range of applications, such as conducting a 5G-powered remote surgery on a human brain, transmitting ultrahigh-definition television content through 5G networks and piloting the operation of self-driving buses and automobiles in some cities.

He made the remarks at a 5G forum during the ongoing China International Fair for Trade in Services held in Beijing. The CIFTIS, which marks the country's first major international trade event held offline since the start of the COVID-19 outbreak, began on Friday and will continue through Wednesday.

As of July, about 99 telecom operators in more than 46 countries and regions have started offering 5G services, Wen said, adding that China is working hard to promote cross-industry cooperation on 5G, which is one of the keys to giving a full display of 5G's potential.

According to the Global System for Mobile Communications Association, the international association of mobile operators better known as GSMA, China has consolidated its position as a global leader in 5G, with the nation expected to account for 70 percent of global 5G connections in 2020, despite the short-term headwinds from the outbreak.

The China Academy of Information and Communications Technology, a government think tank, forecast earlier that China is likely to spend 1.2 trillion yuan ($175.4 billion) on 5G network construction by 2025, driving more than 3.5 trillion yuan of investment in the upstream and downstream industrial chain and other related sectors by then.

Frank Meng, chairman of Qualcomm China, said on Saturday that 5G is being rapidly deployed in China and the US chip giant aims to seize the opportunity to deepen its partnership with Chinese companies.

Regardless of any changes in economic situations or business environments, Qualcomm remains confident in the Chinese market, and the company is dedicated to expanding collaboration and common interests with Chinese partners, Meng said.

He said the CIFTIS offers a good platform to showcase the innovative products Qualcomm has jointly developed with Chinese smartphone vendors and other telecom companies.