5G technology is bringing significant changes to the infrastructure sector in Shenzhen, freeing workers from heavy workloads and enhancing their work efficiency. 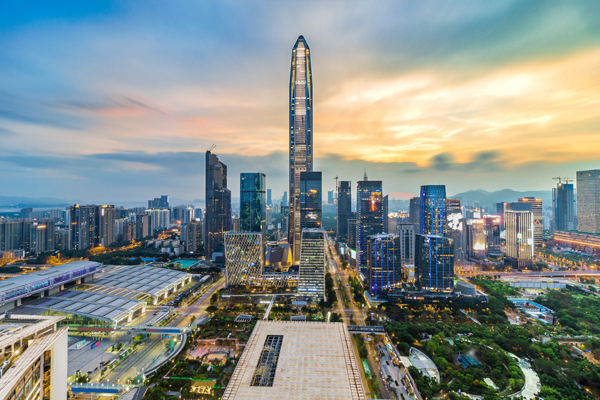 The city in Guangdong province announced on Aug 17 it has become the first Chinese city to achieve full-scale 5G deployment, with more than 46,000 base stations having been built so far.

At Pengcheng transformer substation, robots are used to monitor whether electricity equipment is running smoothly. They then send messages to the command center, where workers conduct analysis and diagnosis of the situation to ensure that everything is going well.

The transformer substation, which takes up 20 percent of the load of Shenzhen's daily power grid, finished its upgrading not so long ago by establishing a 5G network in the area.

In the past, workers had to deal with a large amount of work such as equipment inspection and operation on site, which is a heavy burden for them. With the 5G network, they can let robots do the work and get all the information in the command center, said Xie Zhiyi, head of Pengcheng transformer substation.

"For a check list with 1,330 items, it takes three days for a worker to get the inspection work done. But with 5G and artificial intelligence technologies, we are able to finish it in just an hour. Efficiency of power grid equipment inspection has increased by 270 percent," Xie said, adding the substation has so far deployed a total of 1,036 intelligent devices, including inspection robots and 5G cameras.

"The 'new infrastructure' of 5G has unleashed fresh momentum for our industry and brought significant changes to the way we work."

The power station is just one of various scenarios of 5G application in infrastructure projects in Shenzhen. The next-generation wireless network is also promoting the upgrade of traditional ports in the city.

Mawan SmartPort is the country's first port that was upgraded from a traditional port to a smart one.

"One of the most typical examples of 5G application in our port is the remote control of gantry cranes," said Hu Zijian, a worker at Mawan SmartPort.

"Previously, workers had to climb to the operators' cab to work, which is dozens of meters high above the ground. Working conditions are tough. Now, they can sit in front of the computer in the control room and finish the work as high-definition videos of the site are transmitted to the computer with superfast 5G network," Hu said.

Deployment of the 5G network has also reduced construction and operating costs, and enhanced the stability of internet in the port.

"Ports used to connect to the internet mainly through optical fiber or Wifi, which is high in construction and operating cost and low in stability. And some areas cannot be covered by the internet," he said. " (The) 5G network provides the foundation for us to offer better services."

The "smart" upgrade has enhanced the port's operating efficiency by 30 percent and cut the number of workers on site by 80 percent, said officials of China Merchants Port, which owns the Mawan SmartPort. Safety hazards have been reduced by 50 percent.

Li Yubin, deputy general manager of CMP, said the change in Mawan SmartPort could become a role model for other domestic and overseas traditional ports to seek "smart" transformation.