With China on its way to accelerate the pace of "new infrastructure "and urbanization projects to generate fresh growth momentum, Siemens AG, the German technology giant, plans to seize more market share as Chinese cities' demand for intelligent urban infrastructure has notably surged in recent years. 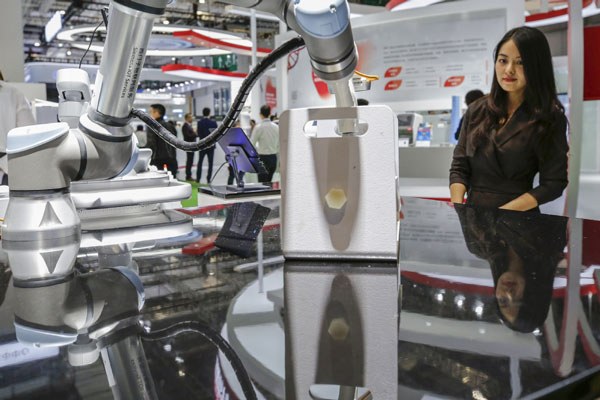 Even though COVID-19 has brought unprecedented challenges to city and infrastructure management in China, the application of big data, artificial intelligence, 5G and other technologies in combating the pandemic allows the country to draw on the potential of digitalization and intelligent technologies in managing cities, said Thomas Brenner, executive vice-president at Siemens China.

Traditional urban infrastructure entails supply of, and demand for, public services, and the infrastructure for smart cities is about to change that system, helping cities to make a quick and efficient response to requirements via data information, so as to ensure the healthy and sustainable growth of smart cities.

As China is accelerating the development of "new infrastructure", the integration of infrastructure with AI, internet of things, big data, cloud computing and blockchain, as well as other advanced technologies, will greatly drive the transformation and upgrade of the electricity grid, buildings, mobility and other sectors.

This will be as part of the effort to build more efficient, resilient and livable smart cities, said Brenner, who is also the general manager of the Smart Infrastructure unit at Siemens China.

As buildings account for a large amount of energy consumption globally, and an essential part of a city, he noted the intelligence of buildings and infrastructure facilities is the key to developing future smart cities.

To save the power and operational costs, smart technologies will be adopted in many cities across China to realize information-sharing and unified management.

The country's investment in "new infrastructure" is expected to reach 17.5 trillion yuan ($2.47 trillion) for the 2020-2025 period, marking an annualized growth rate of around 21.6 percent, according to data predicted by the National Development and Reform Commission, the country's top economic planner, released in June.

After providing and installing smart energy management, fire safety system and building management solutions to Beijing Daxing International Airport, Shanghai Tower, industrial parks and data centers across China, Siemens will continue to focus on developing technologies that can meet the company's goals of decarbonization, decentralization and digitalization in China over the long run, Brenner said.

The Chinese government is seeking new ways to promote energy efficiency and minimize carbon emissions to design healthier environments in cities. With incentives put in place and high demand from the market, Siemens is now experiencing fast growth in these fields, said Brenner, adding the potential benefits could be even greater if they are extended to all parts of the ecosystem of city management.

Sun Fuquan, a researcher at the Chinese Academy of Science and Technology for Development in Beijing, said cities－including Shenzhen, Suzhou, Wuhan and Wuxi－would be attractive markets for both global and domestic companies to expand their presence in the field of smart and green buildings.

China has already set goals to become the world's biggest market in this area, including the goal of 30 percent green buildings for new construction by the end of the 13th Five-Year Plan period (2016-20), he said, noting the country needs to focus on sustainable development strategies for urbanization, environment and industrialization sectors.

"The technologies of new green buildings and smart city solutions can effectively test and identify the sources of pollution or resource inefficiency in cities, and could help governments create adequate measures to tackle the issues, such as high power and maintenance costs," he said.

Beijing announced in early June that it will make efforts to develop smart city solutions and green technologies in eight fields. These include air pollution prevention and control, and water conservation and water environment, according to the authorities.

The fields also include energy-saving and environmental services, reduction of solid waste and recycling, restoration of polluted areas and soil, use of modern energy, smart transportation, and eco-agriculture and eco-forestry, according to the municipal government.

The plan, which highlights the leading role of companies in green technology innovation, forms part of efforts to build Beijing into an innovation center for environmentfriendly technologies with global influence.