Huami Corp, the US-listed maker of smart wearables, has stepped up its push into artificial intelligence technologies by unveiling new chips and setting up an AI research institute. 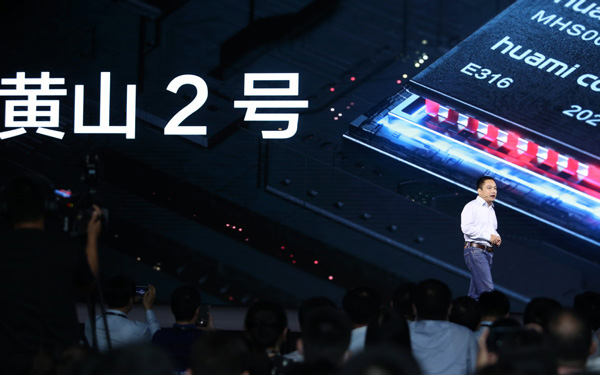 The company has inked a partnership deal with renowned Chinese respiratory expert Zhong Nanshan's team for developing smartwatches that may come in handy for the follow-up care and treatment management of recovered COVID-19 patients.

Huami also launched its Huangshan 2 chips, nearly two years after coming out with its first-generation self-developed chips, at the AI Innovation Conference in Hefei, Anhui province. The chip will power the company's upcoming smart wearables and was developed by its chip research and development department based on the RISC-V instruction set. RISC-V is an open-source chip architecture.

Huang Wang, founder and CEO of Huami, said the process was not an easy task and only a few domestic companies have been able to mass produce self-developed chips until now.

According to the company, the updated chip has a higher recognition rate for atrial fibrillation based on heart rate data, which is seven times better than the Huangshan 1.

The company said the updated chip is expected to go into mass production in the fourth quarter of this year. The new products using the chip will hit the market in the first half of next year.

As for the AI research institute, it has established three joint laboratories, including one with the team led by Zhong, the academician from the Chinese Academy of Engineering, to jointly promote the research and application of smart wearables for respiratory health management.

Huang said: "As the collaboration among medical institutions, R&D institutions and enterprises intensifies, we are excited to leverage our expertise in smart wearable technology to promote applied research and transformational achievements in respiratory health."

Huami has also teamed up with the Chinese Athletics Association to build a lab which will focus on the use of wearables for sports training and other activities.

The company has also reached a strategic cooperation with intelligent voice company Unisound, to jointly develop smart voice assistants that can be applied to watches.

The moves are part of Huami's broader mission to be a data-driven, cloud-based company offering healthcare insights. Huami has been helping Xiaomi design and manufacture wearables including smartwatches and fitness trackers, but also developed its own branded smartwatches and other smart wearables.

Market research company International Data Corp said in its latest report that the spread of COVID-19 had adverse effects on the supply of smart and basic watches as many of these devices share components and resources with smartphones and PCs, which were also affected during the first quarter of 2020.

Ramon T. Llamas, research director for IDC's Wearables Team, said in the report that despite the decline, a few vendors, such as Huawei, Garmin, and Huami, managed healthy growth thanks to lesser reliance on markets in China and further expansion into the United States, Europe, and other parts of Asia.