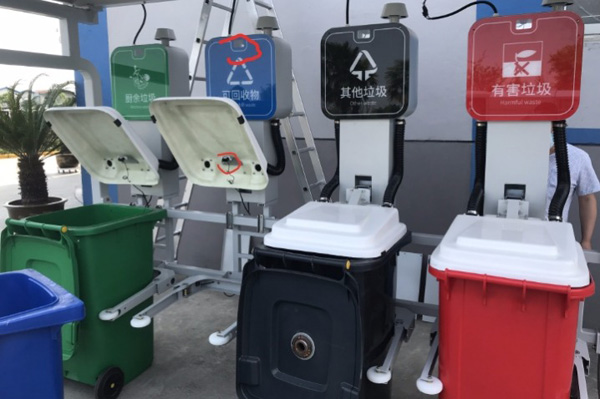 The company which used to make high-end lidar products for drones, robots and railway systems, has developed a product that can be installed on trash cans.

The device can detect people approaching and the trash can will automatically open its lid. In this way, residents can effectively avoid contact, which can spread disease.

The possibility of pathogen transmission can be reduced greatly with the trash cans.

"By developing this product at this special time, we want to express a message that as a high-tech company we are not exclusively focused on cutting-edge technologies that can bring profits. We also want to bring high-tech to people's daily lives and help governments manage cities better," said Li Yuan, Benewake's chief executive.

In addition to detecting people, the Lidar device can transmit the data to vehicles of garbage-collection stations automatically when the trash can is 80 percent full. This is helpful in the logistics of waste treatment.

Li said the company has optimized functions for the Lidar technology to achieve optimum cost performance, and it's available for public use.

According the company, Lidar has been applied in cities such as Shanghai; Wuhan, Hubei province; and Suzhou, Jiangsu province.

According to the annual government work report delivered by Premier Li Keqiang in May, China will take action to ensure more effective protection of the environment.

"Priority will be placed on curbing pollution in a law-based, scientific and targeted way. … We will step up the construction of sewage and garbage treatment facilities and move ahead with the sorting of household waste," he said.

Following the lead of Shanghai, which began its mandatory household waste sorting system last year, Beijing put rules into effect on May 1.