Recognizing the crucial role that traditional Chinese medicine has been playing in the fight against COVID-19, Chinese online healthcare platforms are including TCM consultations into their services, allowing the age-old remedies to play an even bigger part. 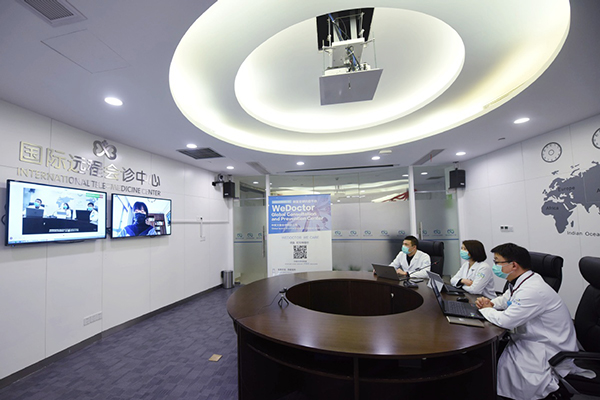 As early as Feb 14 when COVID-19 had not yet been declared a global pandemic, He Jialang, vice-president of the World Federation of Chinese Medicine Societies－who was in Rome at the time－already realized that time was of the essence when it came to epidemic prevention and control.

After days of busy web browsing, he finally got in touch with Huatuo Cloud, a platform under Hangzhou-based digital health company WeDoctor, and launched an international traditional Chinese medicine epidemic prevention and control platform.

Joining TCM efforts from various countries and regions around the globe, the platform aims to promote internet-based TCM services to better serve the cause.

"No one can stand alone in the face of a severe infectious disease. I hope that all TCM professionals can join hands, adopt multiple TCM treatment methods, give full play to internet-based technologies and help people win the fight," He said.

As the epidemic developed into a pandemic, TCM demands from overseas have been constantly growing. On March 14, WeDoctor launched a global epidemic prevention and control platform. The platform－Global Consultation and Prevention Center－enables more than 8,400 Chinese medical professionals to offer help via the internet.

On March 17, a special zone－Famous TCM Doctors－was established on GCPC. The zone integrated previous services offered on Huatuo Cloud's international TCM epidemic prevention and control platform, and joined efforts with over 2,500 TCM experts from home and abroad, to provide services to people during the special period.

Through WeDoctor's official WeChat account guahaowang, overseas users can access GCPC. Users can then gain access to free services such as online TCM consultations, which are open to all countries, as well as anti-epidemic videos, among other features.

What China-based internet healthcare contributed to the fight against the pandemic has attracted broad attention overseas. At the beginning of February, a 39-year-old COVID-19 patient in Wuhan, Hubei province－the hardest-hit region in China－turned to WeDoctor's Huatuo Cloud for online advice.

Through the platform, Cao Hongxin, former head of the China Academy of Chinese Medical Sciences, along with his team, learned more about the patient's condition and made treatment recommendations based on his symptoms and tongue diagnosis.

After taking three remedies recommended by the TCM experts, the patient's fever and coughing significantly reduced. By mid-February, his nucleic acid test produced two negative results. With the help of TCM intervention, none of the patient's four family members who were in close contact with him were infected.

Cao's team has since joined the TCM expert group on WeDoctor's GCPC. Outside China, TCM professionals from 13 countries, including Italy, France, the United Kingdom and Thailand, also joined forces.

"Digital health is playing an increasingly important role in this fight. Thanks to previous communication and exchanges through online platforms, overseas TCM professionals helped stem the spread of the contagion and provide front-line diagnosis and treatment in a timely manner," said He from the WFCMS.

According to WeDoctor, by April 22, its epidemic prevention and control platform had served a total of 3.26 million users from China and more than 220 other countries and regions around the world. The platform has been recommended by over 170 Chinese embassies and consulates overseas.

In order to offer the latest TCM diagnosis and treatment information to medical professionals around the globe, WeDoctor's GCPC organized its experts to translate TCM treatment plans included in the National Health Commission's seventh edition of COVID-19 diagnosis and treatment guidelines. Currently, Chinese, English and French versions are available on GCPC's "Famous TCM Doctors" zone, and other language versions will be available soon.