He Xiujuan, a supervisor in a farmers' market in Tongling city, East China's Anhui province, received a message reminding her that there is someone not wearing a mask in the market. 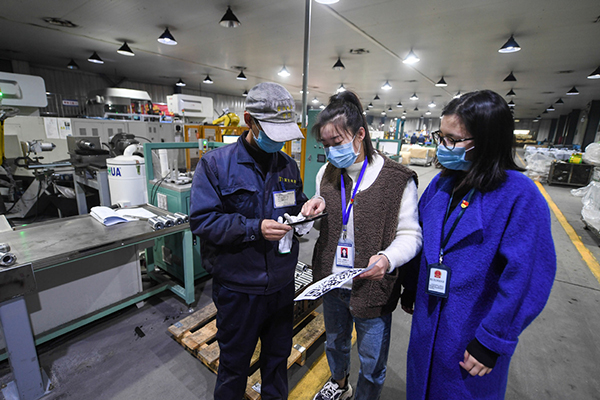 The message was sent by an app supported by the Cyber Brain of City project, which was developed by Chinese artificial intelligence company iFlytek Co Ltd.

"The cameras installed in the market would capture images of unmasked passengers, and the system would analyze and send us the pictures," said He.

"With the help of the app, we can locate and dissuade those unmasked in a timely manner, avoiding the risk of cross infections," He stressed.

The COVID-19 outbreak has posed challenges to the urban governance of Chinese cities, but also pushed them to build smarter cities with cloud computing, 5G, artificial intelligence and other advanced digital technologies.

According to Hu Zhennan, director of the data resource management bureau of Tongling, the Cyber Brain of City project has come to the fore amid the epidemic, helping community workers to receive the information of returnees automatically, observe the condition of those quarantined at home, and prevent the gathering of crowds.

Zhang Ping, a 74-year-old woman living alone in Tongling, has seen the presence of digital technologies in her daily life.

In the community where she lived, a real-time system supported by the Cyber Brain of City has given elders a great sense of security.

According to Chen Jun, an official with the community, the system would record and analyze the data of the elderly living alone in and out of their homes, and compare them with their travel routines based on big data and facial recognition technologies. The community workers will be automatically alerted by the system if anything is different.

"If I didn't go out for a long time, the community worker will come to check if everything is ok," said Zhang.

With the updated 3.0 version of the system, the City Brain covers 48 scenarios, including public transportation, urban management, health care and grassroots governance.

The health code, launched on Feb 11 as a "certificate" for people's health condition, is an important part of the City Brain project in Hangzhou.

With the latest digital technologies widely applied, access to government services has also become easier as the country develops smarter ways to run its cities.

On April 8, when Wuhan ended the months-long lockdown, the city hard hit by the epidemic saw a soaring number of visitors to its e-government service platform. A large number of citizens went online to make appointments for marriage registration, up 300 percent compared with the figure before the Spring Festival holiday.

Anhui province also increased its online government service items to 1,122 amid the epidemic, with the online service rate rising to 95.7 percent.

"The epidemic has motivated government services and public services to go digital, driving the improvement of urban governance with digital technologies," said Wang Wei, deputy director of the data resources bureau of Hefei.