The competition in China's robot vacuum cleaning sector has intensified as consumer robotics companies and household appliances makers are cashing in on the lucrative business due to the fast changing demand from Chinese consumers for high-end products and given the low penetration rate of smart home appliance products. 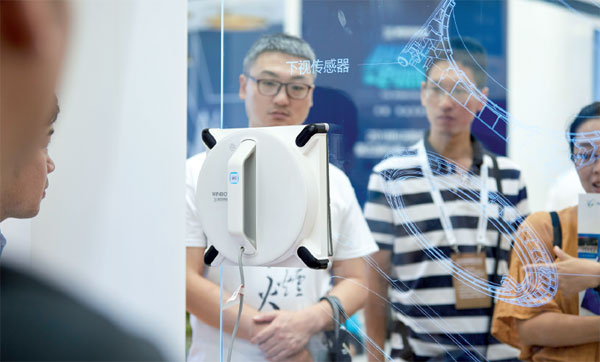 iRobot Corp, the US-based robotic technology solutions provider, is beefing up its efforts in online sales in the wake of the novel coronavirus outbreak. It is eyeing huge growth potential from China's high-end robotic vacuum market, a top company official said.

"iRobot is very carefully responding amid the outbreak. Luckily, our manufacturing is already coming back on line, so we hope the effect will be moderate for iRobot," said Colin Angle, chairman and CEO of iRobot.

"Our factories responded very quickly and aggressively to the situation. And in China, our factories are already well on the way to being at full production."

Angle said iRobot is increasing its investments in online marketing and promotion, such as short video platforms Douyin and social media app WeChat. The firm hopes to offset some of the falls in revenue from brick-and-mortar stores.

Angle expressed confidence on the development prospects in China, underlining the fact the company is mainly targeting the country's high-end shoppers. The epidemic had a limited impact on the consumption behavior and decisions of those shoppers. He believed the whole robot vacuum cleaner industry will maintain vigorous growth over the next few years.

"The market demand will come back quickly when the contagion ends," said Kelly Zhang, vice-president of iRobot's sales and marketing, and general manager of iRobot China. "The COVID-19 outbreak has a relatively small influence on our online sales. We see consumers are trapped indoors and switching to online purchases."

iRobot is a world leader in the household robots sector outside of China, accounting for 60 percent market share in the category of robot vacuum cleaners priced at over 2,000 yuan ($283), said Angle.

He noted the company concentrates on the premium segment, which is also its advantage in China, and this strategy has brought about very good business growth.

Last year, iRobot spent $140 million on research and development, which is about 12 percent of the company's total revenue. The company's revenue amounted to $1.2 billion in 2019.

The company launched a floor mopper tailor-made for the Chinese market in 2016, and established a commercial team at its Shanghai office to directly manage sales, marketing and after-sales services so it can be more responsive to the local market.

Statistics from market researcher and consulting company GfK showed the total sales revenue of robot vacuum cleaners in China rose to 12 billion yuan in 2018 from 7.5 billion in 2017, with the annual compound growth rate reaching 51 percent.

The consultancy also said the penetration rate of home service robots is just 5 percent in coastal cities in China, compared with 16 percent in Europe, the United States and other developed countries.

Market analysts Euromonitor International said that in terms of absolute volume growth, robotic vacuum cleaners are expected to record the highest growth in the Asia-Pacific region over 2016-21, driven by China where internet retailing has risen and a decrease in unit prices.

Chinese home appliance firms such as Midea and Haier, and smartphone manufacturer Xiaomi are also eyeing the niche market with the launch of similar products, making it increasingly crowded.

"Home service robots are designed to help people improve their daily lives and maintain a healthy home environment. During the prevention and control of the epidemic, some consumers have enhanced their health consciousness, which will boost the demand for smart household appliances," Qian added.

"The smart home industry is now developing by leaps and bounds, thanks to advances in the internet of things, big data and other technologies," said Zhang Yanbin, an independent researcher in the home appliances sector.

"With people's increasing requirement for a high-quality life, the artificial intelligence-enabled smart home sector has a promising future."

Beijing-based market consultancy AVC said that as of March 1, the online sales of iRobot's robot vacuums ranked fifth in the Chinese mainland market, behind Ecovacs, Xiaomi, Roborock and Midea.