As the world is deeply concerned with the COVID-19 outbreak's disruptions on the global supply chain, some US officials have attempted to pour oil on the flames by using political forces to sever normal supply cooperation. 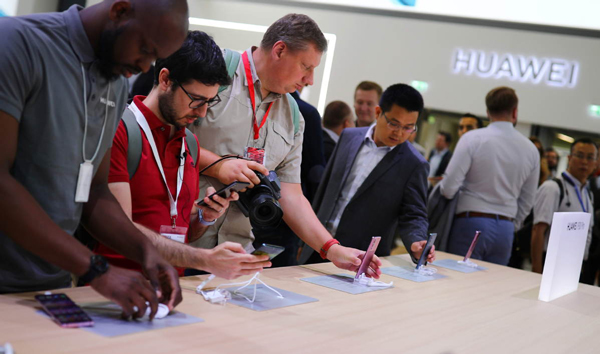 A new proposal has been reportedly put forward by some US politicians to cut Chinese telecom heavyweight Huawei from global supply chains. The proposed rule change will require foreign companies that use US-made chip-making technology and software to obtain a license from the US before selling designated types of chips to Huawei.

Such a move will undoubtedly add a burden on the world, which is already struggling with fragmentation of supplies and dwindling trade volumes amid the novel coronavirus pandemic. If adopted, the proposal will inevitably make things worse, given the sprawling size of Huawei's business and its thousands of suppliers around the world.

As the top telecom equipment maker and the second-largest smartphone vendor in the world, Huawei purchases tons of chips, relevant products and services every year from US semiconductor chip companies, including Qualcomm Inc, Intel Corp and Micron Technology, as well as European suppliers, such as Arm Holdings and NXP Semiconductors.

While what those US politicians are hoping to do to Huawei is a barbarian intervention in the operation of the Chinese company, it would disrupt the normal functioning of the global chip-related supply chain, and all companies that rely on this chain to survive will suffer.

Boston Consulting Group said in its latest report that in each of the three quarters after the US government restricted sales of certain technology products to Huawei in May 2019, the top US semiconductor companies have reported a median revenue decline of between 4 percent and 9 percent.

If the US increases restrictions on the semiconductor trade with China, it could endanger its own position as leader in the sector, the report added.

The BCG also warned that if shipments of US chips and chip making equipment to China were stopped, and China banned imports of US electronics and software, it could cost US companies 37 percent of their annual sales, that is, $83 billion in 2018.

Some scaremongering US politicians, however, totally go against such warnings and remain pigheaded in pursuing their dubious agenda. If their proposal were approved, it is the US chip companies and the US semiconductor industry that stand to suffer the most.

If the US government leverages its technological superiority in an area to sever the global supply chain, the US industry in that area will risk losing vitality, and it is just a matter of time before other countries develop their own alternatives of equal or even better quality.

As the world's largest 5G and smartphone market, China has already made constant progress in telecommunication and electronics industries. A string of US tech companies, including Qualcomm and Apple, heavily rely on China market for revenue and supply chains.

Contrary to some US politicians' despicable practices of threatening to sever chip-related supply chains amid the pandemic, China has been scrambling to help local factories of international companies resume production to help stabilize global supply chains.

China has recently accelerated resumption of work at manufacturing, commercial and logistic companies, such as pharmaceutical product manufacturers, to ensure the supply for international markets.

Amid the world's biggest healthcare challenge in decades, it is closer global cooperation, not disconnection and trade restrictions, that is needed to fight the virus and restore business activities.