The US government is extending a temporary license that will allow US companies to continue doing business with Chinese tech giant Huawei Technologies Co for another 45 days. 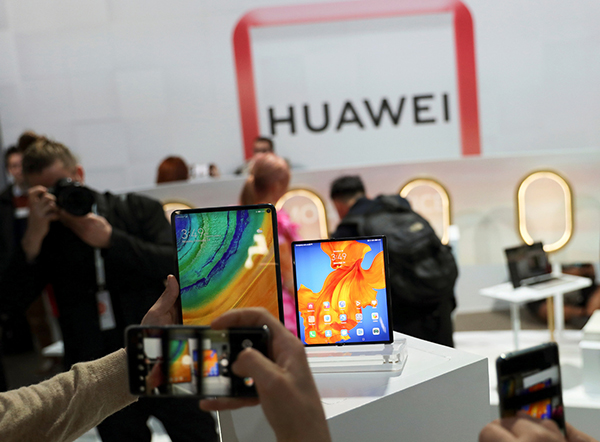 The newly extended license will expire on May 15. It's the fifth time that Washington has loosened restrictions on US business deals with Huawei after it put the company on a trade blacklist last May based on allegations of security risks.

Experts said the US move underscores once again how rural US telecom carriers rely heavily on Huawei equipment for network coverage and that US companies are hurt significantly when political forces sever normal business links.

The US Department of Commerce said on its website on Tuesday that the extensions were intended to allow time for companies to change their Huawei equipment to alternative suppliers.

The federal agency said it is seeking public comment on whether it should issue future extensions and asked what was the impact and cost for US companies would be if the license is not extended. Most of Huawei's US clients are telecom carriers that operate in rural areas.

Michael Beehn, CEO of SI Wireless, which provides mobile phone and broadband services to approximately 20,000 customers across western parts of Kentucky and Tennessee, said in late 2019, "SI Wireless' core network infrastructure is constructed with and depends on Huawei equipment."

The company estimated that replacing its Huawei equipment would cost $40 million to $60 million.

Huawei did not comment on the latest extension. But the Shenzhen-based company has repeatedly said that such extensions do not have a substantial impact on its business and don't change the fact that Huawei is being treated unfairly.

Bai Ming, a senior research fellow at the Chinese Academy of International Trade and Economic Cooperation, said US companies and clients that will suffer the most if the license is not extended in the future.

"If not for the ban, Huawei would spend more than $10 billion a year to buy components from US tech companies, including chip giants Qualcomm, Intel and Micron," Bai said.

In a new report, the US-based Boston Consulting Group said that if shipments of US chips and chipmaking equipment to China were stopped, and China banned imports of US electronics and software, it could cost US companies $83 billion in annual sales.

Washington's latest extension came as Huawei has been given a green light to be part of the United Kingdom's 5G rollout plans.

The UK government on Tuesday defeated an amendment proposed by a group of Conservative Party members of Parliament trying to stop local telecom operators from using Huawei in 5G construction.

As Huawei secures more votes of trust in European countries, it is also grabbing big 5G orders in China, which is expediting 5G network construction. Huawei has won more than 50 percent of a key 5G procurement plan from China Mobile, the nation's largest telecom operator.