More than 1,300 tech firms in China are innovating their more than 33,000 drone models to make the remotely operated aircraft versatile enough to perform unusual functions that can strengthen the fight against the novel coronavirus. 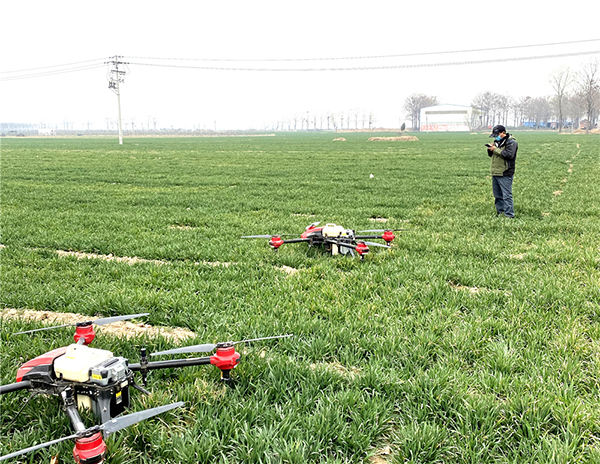 In North China's Inner Mongolia autonomous region, local people in Caofangzi village near Baimiao town use unmanned aerial vehicles, or UAVs that are more popular as drones, to remind fellow villagers to prevent and control the spread of the novel coronavirus.

"Don't leave home without wearing a mask." An old woman in Caofangzi who went out without a mask was intercepted by a drone. She stared at the drone for several seconds and went back home obediently.

In North China's Shanxi province, a UAV association has kept more than 100 drones on standby, ready to cooperate with relevant departments to carry out epidemic prevention and control measures.

"Using UAVs to provide services is the best alternative to protect epidemic prevention personnel," said a staff member of the association.

Infrared UAVs have been used to detect body temperatures in Yichun city, East China's Jiangxi province, so as to find potential infected persons in time.

The wide application of UAVs is enabled by China's strong manufacturing capability. Liu Weiwei, deputy director of the Aircraft Airworthiness Research Institute, which is part of the China Academy of Civil Aviation Science and Technology, said there were 1,353 UAV manufacturers in China, with 33,034 registered UAVs and 310,218 registered users.

The general aviation branch of the China Air Transport Association asked its member enterprises to make the most of the advantages of UAVs in remote-control and flexible flight.

"The level of science and technology in China's rural areas has been greatly improved, and more UAVs will definitely be utilized in the epidemic prevention and control efforts," said Xing Yuan, sociology professor at Shanxi University.