Huawei Technologies Co unveiled its latest foldable smartphone Mate Xs on Monday in a push to improve the product category widely seen as an important trend in the smartphone industry. 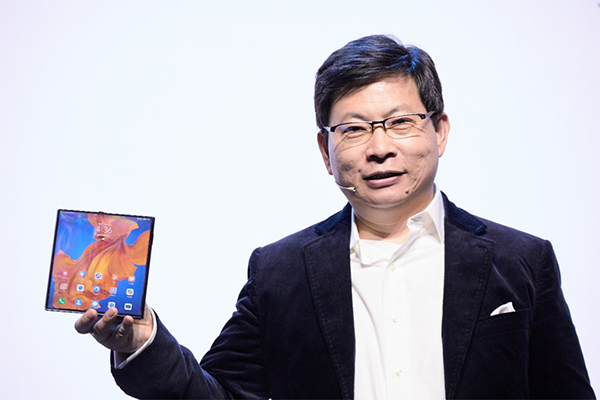 Priced at $2,700, the handset is also part of Huawei's broader push to maintain the growth momentum of its smartphone business, despite the US government's restrictions.

Yu Chengdong, CEO of Huawei's consumer business group, said the company had already shipped 10 million units of 5G smartphones by January, and Mate Xs marks an important update to its first foldable smartphone Mate X, which was unveiled a year ago.

The move comes as Huawei safeguarded its reputation as the world's second-largest smartphone vendor last year amid the US government's efforts to ban it from using Google's Android operating system in its mobile devices.

To cope with Washington's restrictions, Huawei has developed its in-house operating system Harmony, and it has been working hard to build the ecosystem for Huawei Mobile Services, the foundation for its ability to sell smart devices in overseas markets.

Huawei said it will invest $1 billion to encourage software developers to be part of Huawei Mobile Services, or the HarmonyOS ecosystem, with 80 percent of the money going to applications for overseas countries. Foreign consumers are accustomed to Google's Android system, Google Maps and YouTube, but Huawei can't access the updates of these services in its existing smartphones and future models amid the US ban.

Huawei is determined to go all out to cultivate a robust ecosystem for the Huawei Mobile Services to reduce the fallout of Washington restrictions.