At around 6 pm, Yu Feiwen, an online shop owner, closed her laptop after finishing work. She and her partners, based in their homes in five cities due to the current coronavirus outbreak, "met" every day thanks to cloud working. 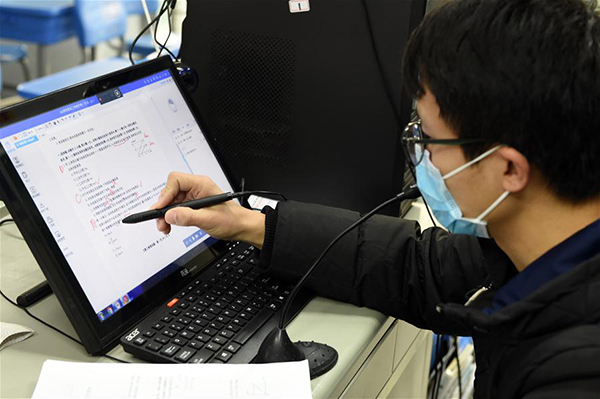 "We held meetings to brainstorm and share ideas on running the shop, and also maintain customer relations online just like before," Yu said.

Some difficulties still exist as they are not present in the office, but they are still making a profit.

"We work as hard as usual. The only difference is that we work from home," she said.

In the meantime, other small businesses and companies in China have scrambled to resume work on the cloud. Many employers, as well as employees, for the first time, have to get familiar with telecommuting tools such as video conferences and online office kits.

According to QuestMobile, a mobile Internet big data company, the time Chinese spent on the Internet increased from 5 billion hours on Jan 23, to 5.76 billion the next day, and 6.1 billion on Feb 3, the first day of working from home for many companies. The time spent on telecommuting software is also growing rapidly.

As a result, mobile technology companies such as Tencent, Alibaba's DingTalk and China Mobile have all raced to provide technical support, most of which free of charge, to companies and individuals in need.

The number of online meetings supported by Tencent Meeting on Feb 10 was 100 times that of its previous average daily use.

DingTalk said it has served more than 10 million enterprises and over 200 million people. To meet the huge demand in peak hours, DingTalk has added over 20,000 temporary servers and expanded bandwidth to enhance its calculation capacity.

Tao Jun, DingTalk's intelligent personnel business director, said telecommuting for many companies has evolved from building their own OA systems to adopting the framework of a "cloud platform."

The emergence of telecommuting represents the increasing digitalization of Chinese enterprises, which ensures a boost in the market and users in related fields, said Chen Lu, an expert on digital enterprises.

According to Frost&Sullivan, a US-based business consulting company, from 2014 to 2017, China's video conference market grew from 5.23 billion yuan ($750 million) to 11.04 billion yuan, with a compound annual growth rate of 28.3 percent. The market size is expected to reach 44.6 billion yuan in 2022, with business management, healthcare and education being key areas.

Thanks to the increasing digitalization of companies and governments, enterprise management is also increasingly merging with social governance.

Hangzhou, capital of Zhejiang Province, has adopted QR codes for the control and prevention of the novel coronavirus outbreak. The QR code, produced in the mobile app of real-name registered Alipay, is based on the register's movement over the previous two weeks and tells whether he or she has been to virus-hit areas.

Online health management is therefore realized for government and companies, especially since the massive influx of returning workers is expected.

Lan Jianping, director of Zhejiang Institute of Industry and Information Technology, said that digital transformation will not be confined to the office, but will change production and operation as well in the long run, which will further increase the potential of small and medium-sized enterprises.