Lenovo brought a slew of new products to CES — from the $2,500 ThinkPad X1 Fold to the foldable Moto Razr, to the Yogo 5G PC and the silent Bluetooth mouse — to showcase its competence as a device-plus-cloud tech heavyweight. 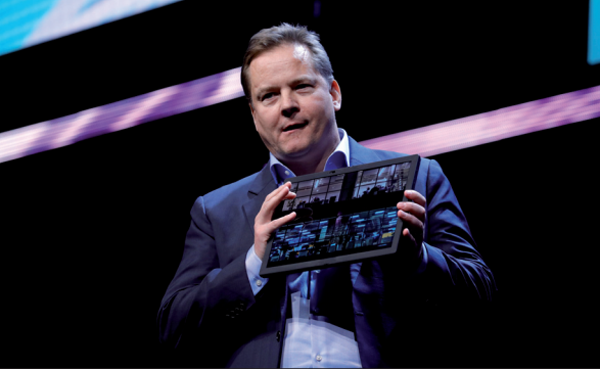 The Beijing-headquartered company also reiterated the importance of maintaining exchanges and collaboration in technology and innovation fields, calling the US and Chinese economies "intertwined", which "can't be decoupled".

The advancement and commercialization of 5G, or fifth-generation wireless technology, and more adoptions and applications of AI worldwide, will drive and influence Lenovo's development strategy.

"We have been attaching great importance to research and development of 5G," said Yang, adding that to maximize the commercial value of the disruptive technology, computers need to stay connected all the time using an ultra-high speed network.

At CES, Lenovo exhibited its Yoga 5G, an ultra-portable 2-in-1 laptop and the first-ever PC powered by Qualcomm's Snapdragon 8cx 5G Compute Platform chips, and other 5G products such as the world's first foldable PC, the ThinkPad X1 Fold, and its 5G foldable smartphone Moto Razr.

According to Lenovo, Yoga can deliver high-speed 5G network connectivity, which is up to 10 times faster than 4G, through 5G service providers or WiFi access. "We considered 'always online' as an important factor for our first 5G PC, which should also be a basic function for smart PCs tomorrow," Yang said.

Voice interaction is another key technical argument for Lenovo products, as voice assistant features were installed to more than 40 models on display at CES.

The market has responded warmly to "our new products, especially the Moto Razr, with many calling it 'the return of the classic'," Yang said. In late November, Motorola released in the United States its Razr foldable smartphone, after its parent company Lenovo disclosed in its second-quarter earnings report that its mobile business group had posted its fourth consecutive quarter of profitability and positive pre-tax income, which improved by $57 million year-on-year.

Lenovo bought Motorola Mobility in October 2014. In November 2016, Lenovo announced that it would discontinue its existing, self-branded smartphone lines to highlight Motorola-branded devices instead.

On Jan 6, according to CES sponsor the Consumer Technology Association, 2020 is deemed to be the "inaugural year" for 5G-enabled handsets, and around 20 million units are expected to be sold, with an estimated total revenue of $15.3 billion.

Lenovo "will not abandon the emerging 5G smartphone markets", Yang confirmed. Instead, the company monitors the sector and will later release several 5G handsets, including both flagship and mainstream models.

On the launch of the ThinkPad X1 Fold, Yang said that creating the world's first foldable PC is a major engineering challenge, especially the hinge part. Expected to hit the market in mid-2020, the machine comes with Windows 10 and a 13-inch screen and is priced at $2,499.

It has taken the team four years to solve many technical and computing problems to have the unique commercial device produced.

Gregory Bryant, Intel executive vice-president and general manager of the Client Computing Group, said the "deep co-engineering" collaboration with Lenovo on ThinkPad X1 Fold has "pushed the boundaries of PC experiences and design".

Because of "some uncertainties caused by the US-China trade frictions", 2019 was "really challenging", said Yang. However, Lenovo "still managed to advance our businesses in sectors of personal computer business, and the company is starting to see returns from emerging businesses including its data center group in China".