Artificial intelligence, 5G wireless technology and electric and self-driving vehicles are the life of the party at the ongoing 2020 Consumer Electronics Show in Las Vegas, Nevada, industry experts said. 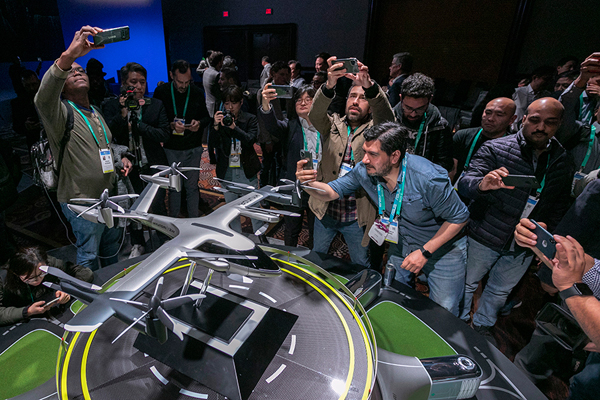 The show, one of the world's largest and most influential technology expos, kicked off for members of the media on Sunday with news conferences and a sneak peek. The official opening came on Tuesday.

According to the Consumer Technology Association, the event organizer, more than 4,500 exhibitors came from around 160 countries. There are around 20,000 transformative new tech products on display in 36 product categories. Hundreds of companies are showing off their latest innovations.

Among the categories, streaming services, wireless earbuds, 5G connectivity and AI-enabled devices are the growth leaders, according to an association report released on Sunday.

While the internet of things has set the pace for the market over the past decade, this year the industry is different.

"We are increasingly confronted with an entirely new IoT, the intelligence of things," said Steve Koenig, the association's vice-president of research.

"5G is one of those ingredient technologies that is really powering the intelligence of things," Koenig said. "The 5G narrative is just going to continue to unfold as we move forward throughout the decade."

According to the association, 2020 will see double-digit growth in the number of 5G smartphones sold and revenue generated.

Around 20 million units are expected to be sold, with estimated total revenue of $15.3 billion.

This year is "an inaugural year for 5G-enabled handsets", said Lesley Rohrbaugh, director of research for the group. By 2022, two-thirds of the handset market will switch from a 4G focus to 5G, she said.

The trend is evident at the electronics show, with companies launching 5G-related devices. TCL, the Guangdong-based TV maker, was to unveil its first 5G smartphone on Monday. The company said it will retail for under $500.

Lenovo is collaborating with Qualcomm for its first 5G computer, the Yoga 5G, set for release this spring.

During Qualcomm's news conference on Monday, company President Cristiano Amon gave an ambitious estimate about the application of 5G in 2020, saying that 200 million 5G smartphones will be shipped this year.

But 5G is not the only star at the expo.

"You are going to see AI prevalent throughout the entire show," Rohrbaugh said.

The consumerization of AI is leading to advancements in many categories: smart homes, smart speakers, human-machine partnerships in the workplace and automated driving, to name a few.

"I believe the application of AI technology makes our product stand out," said Leilei Shinohara, vice-president of Suteng Innovation Technology, a Shenzhen company devoted to light detection and ranging technology, or LiDAR.

"While companies around the world are also focusing on the same technology, their focus has been more on the hardware," he said. But the company brought in AI algorithms developed by a 100-person team to make detection more accurate. The company's automotive LiDAR product has won the innovation award at the expo for two consecutive years.

Koenig sees the upcoming decade as "the electric decade for vehicles".

"And that's not just cars, but all types of transportation," he said, adding that innovations in battery systems, better-built infrastructure and more developed charging systems are all helping to boost the industry.

This year's show will also see a major shift in content. The launch of Disney Plus and Apple TV Plus in 2019 made it a big year for streaming services. NBCUniversal's Peacock, short-form video platform Quibi and HBO Max are all set to launch in 2020.

"There is no shortage of choices out there," Koenig said. The expo reflected the trend, as two of its eight keynote speeches were delivered via streaming service providers — Quibi and NBCUniversal.

With more than 170,000 attendees expected, the expo is an opportunity for big-name companies to break news and for smaller companies to make an impression.

"A lot of media, a lot of distributors are coming here as well. We want to get a little bit of exposure, and we want to have more connections with local distributors," said Wang Kai of Guangzhou Puppy Robot Technology.

Others were also enthusiastic.

"This year, we brought a product that we found most compelling to the overseas market," said Lin Xiaochen, product director of Fujian Nanping Nanfu Battery Co.

"We hope to introduce China's innovative technologies to the world. As our product is winning the CES Innovation Award this year, we hope that introducing it here can help broaden the road for our company, as well as Chinese companies in general in the overseas market."