Alvaro Montoya's story started with a part-time driver job at the Mobile World Congress in Barcelona.

The then Spanish telecommunications engineering student found himself driving for a renowned Chinese entrepreneur. 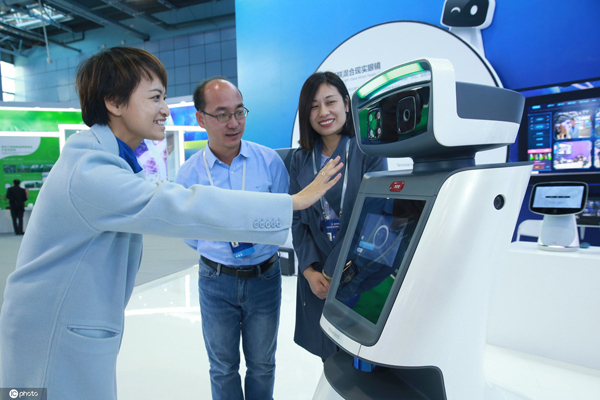 Wu Bin, a straight-A student from Tsinghua University, did not apply to study abroad after getting his master's degree in computer science, nor did he go home to take over the family clothing business.

He became the first from Tsinghua's Department of Computer Science and Technology to launch a startup right after graduation.

In 2019, 28-year-old Wu bagged more than 100 million yuan ($14 million) from investors with his Beijing-based AI fashion company InfiMind, which provides services like clothing recognition, smart recommendations and automatic generation of an item's description.

Kai-Fu Lee, who founded Sinovation Ventures, a Beijing-based incubator and venture capital firm dedicated to nurturing Chinese startups, said AI has entered the stage of empowering traditional industries and creating value, and it is in need of ideas from entrepreneurs and scientists.

Beijing hosts rare concentrations of wealth and top Chinese institutions of higher learning, including China's best computer science departments. According to the Beijing Academy of Artificial Intelligence (BAAI), there are about 67,000 AI professionals in China, nearly 40,000 of whom are in Beijing.

Meanwhile, the proximity to investment also makes Beijing an ideal place to start a new business.

Beijing has also built an ecosystem for AI startups on a scale that leaves other Chinese cities behind.

Wu said x-lab had courses guiding students through every stage of the startup process.

For a foreigner with few local connections like Montoya, these platforms mean more, helping him get through tough times.

When he was strapped for cash, a creator project at Tsinghua funded his trip to Hong Kong to attend a startup competition.

X-lab provides him with free office space for a year, a free address when registering his company, and a network of mentors on-hand to help him grow his business.

"These platforms on campus don't want equity shares. They sincerely hope every team can grow and prosper," said Montoya.

Wu said he was once anxious about the paperwork and licensing process. But when he went to register the company, the process was streamlined and everything got done within three hours.

Beijing also introduced favorable visa policies to attract foreign talent. The pilot express service project reduced the time of issuing permanent residence permits from 180 days to 50 working days. Without a permanent residence, it takes about 20 workdays to apply for a work visa.

Wu said while the campus makes them dare to innovate, the environment outside enables them to feel free to innovate.

In February, a pilot zone to develop new-generation AI technology was launched in Beijing, the first of its kind in China, injecting new impetus for the city's AI industry.

Statistics show there are currently more than 1,000 AI-related enterprises in Beijing, accounting for nearly 30 percent of the total number of AI enterprises in China.

Among the top 100 global AI companies in 2019 selected by research firm CBInsights, there are six in China, five of which are in Beijing.