Fanuc opens robotics base in Guangzhou

Guangzhou Fanuc Robot Co Ltd, the South China base of the global robot giant Fanuc, began operations in the Guangdong provincial capital on Monday. It is expected to play a role in helping build Guangzhou Science City, located in the Guangzhou Development Zone, into an intelligent manufacturing center in the country. 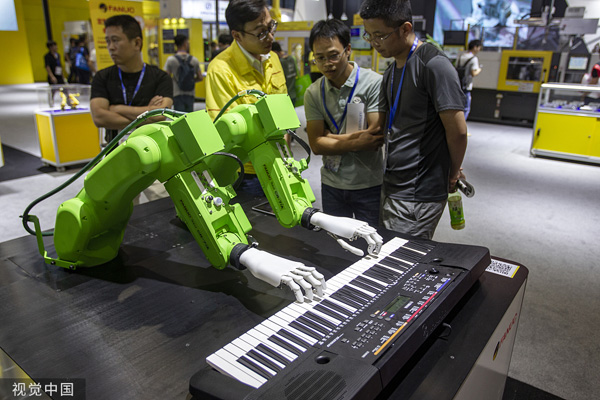 Covering an area of more than 40,000 square meters, the South China headquarters of the world's largest robotics company will build a major base for robot manufacturing, assembly, processing, technical support, R&D, sales, exhibitions, training and warehousing in the coming years.

The Japanese robotics company has assembled and produced more than 600,000 robots worldwide, and its revenue reached 600 billion yen ($5.5 billion) in 2018.

GDD has made developing its artificial intelligence industry a top priority. This year so far it has attracted more than 200 AI companies, including more than 10 robotics firms, to set their production facilities.

GDD, situated in the eastern part of the southern metropolis, reached an industrial production of more than 20 billion yuan ($2.86 billion) from its AI industry last year, representing about 50 percent of the city's total.