Huawei says Mate X will be on sale in November

Foldable smartphones are becoming a new trend among major handset brands, but industry experts believe their high price remains the biggest obstacle to their popularity in the short term. 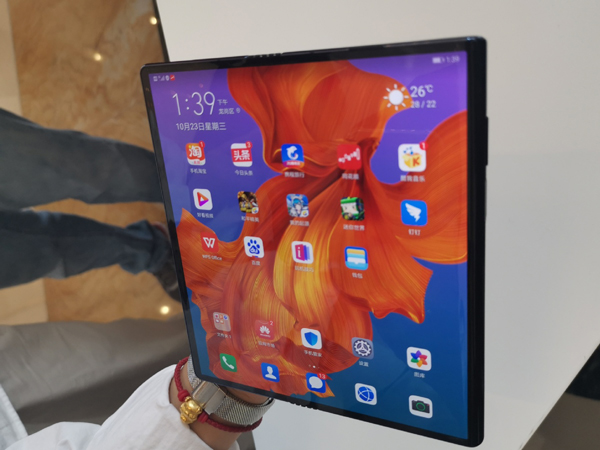 The long-expected gadget, which was first unveiled in February, can transform from a 6.6-inch traditional smartphone with a screen on either side to an edge-to-edge full-view 8-inch tablet.

Powered by the Balong 5000 with the Kirin 990, the smartphone features two batteries, enabling quick charge to 85 percent in about half an hour.

He Gang, head of Huawei's mobile phone division, said new technologies and materials have been developed to increase the screen's solidity by 40 percent.

Besides hardware, the Mate X also optimized its software in recent months, such as an intelligent split screen, which will usher in a new way of interaction between machines and users, he said at a news conference in Shenzhen on Wednesday.

In addition, Huawei has also set up an ecosystem of foldable phones with application software providers.

Samsung reportedly has sold about 500,000 units of its bendable smartphone Galaxy Fold, priced at about $1,980.

But Jia pointed out that mass volume of sales is difficult to achieve in short term before its price falls into a reasonable range.

James Yan, research director at Counterpoint Technology Market Research, agreed that the sales volume of foldable phones won't be large in the next two years, projecting a global shipment of less than 1 million units this year and 2 to 3 million units in 2020.

Due to their high cost and uncertain market acceptance, flexible phones remain in the category of high-end products, he noted.

But Huawei does not need the technology to prove its ability to sell. Its phone sales reached 200 million units by Oct 22, 64 days ahead of last year.

Meanwhile, the phone maker also unveiled a line of new 5G products at the news conference in Shenzhen, including Mate 30 5G phones, 5G mobile Wi-Fi and its first 5G commercial module for the industrial market.