Chinese consumers are scrambling to be the first batch of users of 5G mobile services, with more than 10 million having pre-ordered mobile package services for the fifth-generation wireless technology. 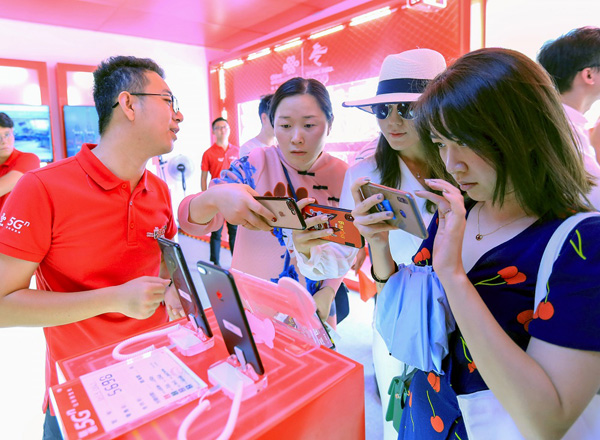 According to early data from the country's three major telecom carriers, more than 10 million consumers had applied for 5G mobile package services by 9:25 am on Wednesday.

The 10 million level marks an 88 percent jump from the data as of Sept 30. By then, more than 5.3 million users had pre-ordered the services.

So far, the three major carriers have not officially launched their 5G data packages yet and they have all offered discounts of up to 30 percent to attract early customers.

The enthusiasm for 5G mobile services came after about 219,000 units of smartphones were shipped in China in August, data from the China Academy of Information and Communications Technology showed.

In July, the shipments of 5G smartphones were 72,000 units. That was about a month after China granted the licenses for commercial use of 5G services on June 6.

"Some of the consumers who have pre-ordered the 5G mobile services may not buy 5G smartphones yet, but their eagerness to try new things can be seen from their enthusiasm," Xiang explained.

China Mobile has attracted more 5G pre-orders than its two smaller rivals so far, partly because it currently has the largest number of 4G users in the country, he said.

The big three mobile carriers said that current telecom users do not need to change their SIM card and mobile numbers. After purchasing a 5G smartphone, they are able to upgrade their previous 4G package to a 5G package.

Employees at the Beijing branch of China Telecom said earlier that the price of a monthly 5G data package could range from 199 yuan ($28) to 599 yuan.

Fu Liang, an independent analyst who has been following the telecom industry for more than a decade, said a key hurdle in 5G adoption was the price of 5G smartphones and data packages, along with the 5G support network. At this time, there is limited coverage of the 5G network around the world.

"But Chinese companies are adopting aggressive strategies to extend 5G coverage and lower the prices. The more quickly 5G networks are constructed and the cheaper the smartphones and data packages are, the easier it will be to convince people to purchase them," Fu said.

China Telecom said it will work along with key smartphone vendors to unveil 5G handsets priced under 2,000 yuan in the first half of next year.

At the same time, China Telecom announced it would partner with China Unicom to build a nationwide 5G network, as they aim to accelerate the rollout of 5G by reducing construction costs.