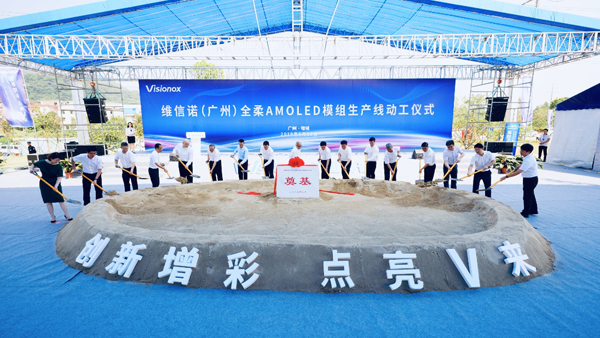 The project will produce six to 18-inch flexible AMOLED modules with high-resolution, curved and foldable functions for wearable devices, vehicles and other applications in emerging sectors.

The production line is expected to bolster the development of the OLED industry chain in the Pearl River Delta region and enhance China's competitiveness in this new type of display field.

This figure will surge to 700 million in 2025, with annual compound growth reaching more than 10 percent.

It can turn out 30,000 glass substrates (1,500 millimeters by 1,850 millimeters) every month and meet the high-end, foldable screen demand for 90 million smartphones.

It started building its second flexible AMOLED production line in Hefei in December, which also has a monthly capacity of 30,000 substrates.

The company has also provided AMOLED screens for ZTE Corp's first 5G flagship smartphone, the ZTE Axon 10 Pro, which was launched in May.