Artificial intelligence will create greater value for society and boost efficiency, and though its increasing use will pose challenges for employment, society can solve such issues, said Ren Zhengfei, founder and CEO of Huawei, on Thursday. 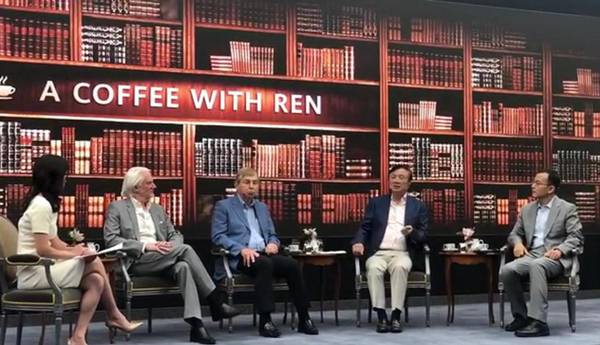 "It demands talents, computing power, sound infrastructure and other factors to fully tap the potential of AI," Ren said in conversation with two AI experts in Shenzhen, Guangdong province.

AI also offers an opportunity for small countries to achieve rapid development, said Ren. But whether a nation can provide sound infrastructure will impact whether it can turn AI into a driver for growth, he added.

"AI will be the biggest industry in future，and we don't want to be put on a trade blacklist in the development of AI for the second time. We want to work together with others to create value for society," Ren said.

According to the senior executive, such a possibility is less likely, because AI is mostly software based.

Ren also said that Huawei is willing to license its 5G patents to US companies to develop its own products.

These companies not only compete with Huawei in the US but all over the world.

AI is still in its infancy, like a seedling. When it first emerged, it could cause trouble or worries. When railways first emerged in China, local people thought the train was a monster. But as AI is used by more industries, people will have better understanding of the technology, Ren said.

Washington first put Huawei on the Entity List in May, accusing the company of posing security risks and banning it from buying US technology without special government approval.

But Ren said the past three decades have proved Huawei has no backdoors. No suppliers have been facing stronger examination than the company. And to make extra effort to reduce worries, the company is willing to ink "no backdoor" agreements with foreign governments, Ren said.

Huawei is committed to preparing back-up plans amid US government restrictions, but Ren said this is not a long-term choice for Huawei, as he opposes the idea of one world, two systems.

"We would rather buy more components from foreign suppliers and produce less of our own components. We will never be a closed company and do everything on our own. We want to get integrated into the world," Ren said.

According to Ren, it took the efforts of over 100 countries and thousands of scientists around the world to finally develop a unified global 5G standard. Ren believes such union is beneficial to the world development.

Chances are low to have "one world, two systems" kind of setup, Ren said.

"If the US doesn't turn its technologies into products and sell them to the world, it is also bad for the US. No country can isolate itself from the world, and it is impossible for anyone to re-build a regional environment," Ren said.

According to him, the US is just like ice water on the Himalayas; it can flow down the mountains to water the plants. But if it stays on top of the mountains, it would freeze and become a glacier.

Also, if developing countries cannot buy such products from the US, he said, they will also find or develop their own alternatives.

Also, it is of crucial importance to protect data while using AI, he said.

"China should roll out a strict law to protect data and seriously punish those who misuse data and violate others' privacy," Ren said.

According to him, China has already made gradual progress in these areas.

Currently, Huawei is leveraging AI to improve production efficiency within the company but has not utilised it to boost social capabilities. Ren said AI-related problems of concern to sociologists will not emerge over the next 30 years.

"We should be more tolerant about new things, because new things always break traditions and are usually difficult to accept for most people," Ren said.

According to Ren, social policies, regulations and moral ethics should work together to encourage new things. Otherwise, a country will fall behind others amid competitions.