Elon Musk, CEO of US electric carmaker Tesla Inc., on Thursday praised the progress of the company's Shanghai gigafactory as he visited China to attend the 2019 World Artificial Intelligence Conference (WAIC). 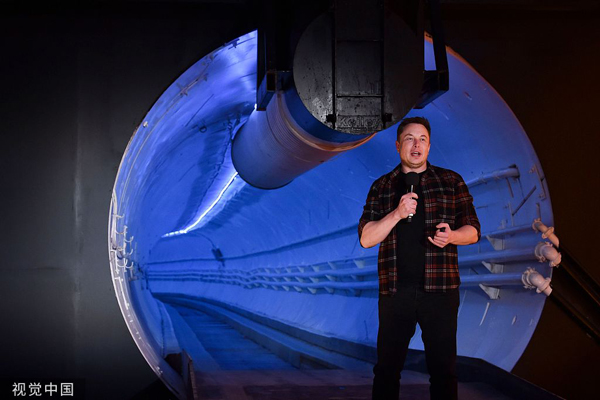 In a free-wheeling talk with Jack Ma, executive chairman of Alibaba and co-chair on the UN High Level Panel on Digital Cooperation, Musk said Tesla China's team has done a mind-blowing job in the building of the gigafactory and he was "astounded" by the progress.

Musk said he had never seen anything go so fast in his life before. "I really think China is the future," he said.

In January, Tesla broke ground on its Shanghai factory, becoming the first to benefit from a new policy allowing foreign carmakers to set up wholly owned subsidiaries in China.

The plant is expected to start production at the end of 2019, with an initial weekly production of about 3,000 Model 3 electric vehicles.

At the 2019 WAIC, the two entrepreneurs shared their insights on the capabilities of AI and the impacts of AI on human beings, ranging from jobs, education to environmental sustainability.

Calling for immediate action and continued momentum towards environmental sustainability, Musk described China a world leader in this aspect as the country takes a substantial share in global electric car production.

The 2019 WAIC, running from Thursday to Saturday in China's economic and financial hub Shanghai, aims to boost AI cooperation and innovation globally.