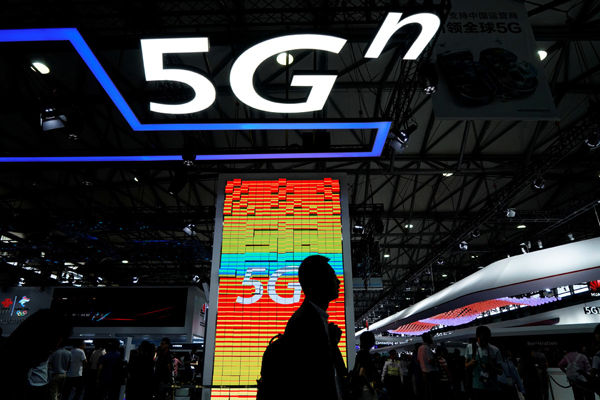 Kunshan Q Technology, located in eastern China's Jiangsu province, is a leading manufacturer of cameras and fingerprint recognition modules for cell phones and tablets. It has ramped up technological innovations as the company looks to the country's huge 5G market.

"You need a new phone to enjoy the high-speed connectivity of 5G. And it won't take long for 5G smartphones to take over the market, which will unlock enormous potential," said Terry Liu, deputy operating general manager of the company.

In early June, China granted 5G licenses for commercial use, marking the beginning of a new era in the country's telecommunications industry.

Affordable 5G phones have started to hit the market as the domestic market leaders like Huawei and ZTE have rolled out their 5G handsets.

Liu has witnessed the number of cameras installed in a single phone increase from only one to four or five and the resolution from two megapixels to 48 megapixels nowadays, which made him realize that the demand for high-quality products may help boost the sustainable growth of the market.

"There will be more cameras with higher resolutions on phones in the future," Liu said. "Our confidence also comes from the continuing upgrade of electronic devices."

While trending toward high-tech like 5G, artificial intelligence and big data have also opened up new possibilities. Some enterprises in the manufacturing sector are gaining steam from clean energy, as China looks toward a greener economy.

Snowman Group, a manufacturer of industrial and commercial refrigeration and cold storage units, now finds itself in an influential position on the track of the new energy vehicle industry.

Headquartered in Fuzhou, eastern China's Fujian province, the company has developed into a major developer and producer of high-level compressors through global mergers and acquisitions. It is the owner of a number of prestigious compressor brands including SRM from Sweden and RefComp from Italy.

"We noticed the SRM had been developing air compressors used in hydrogen fuel cells since the 1990s, so we decided to go one step further to tap into the hydrogen vehicle market," said Lin Rujie, the company's deputy general manager.

It has inked deals with 21 automakers and engine companies including Dongfeng Motors and Yutong Bus to supply air compressors for hydrogen vehicles. The company has also developed a hydrogen bus prototype by cooperating with bus manufacturer King Long Motor.

"We expect the mass production of our hydrogen-powered buses within this year," said Lin. "It will be a very positive momentum to our growth."

Analysts believe that China has huge potential in developing hydrogen energy and China's development of the hydrogen industry is also in accordance with the global strategy on energy transmission.

According to this year's government work report, China continues preferential policies on the purchase of new energy vehicles and facilitates the construction of charging and hydrogenation facilities to boost the automobile industry.